In his first calendar year as Prime Minister of India, Narendra Modi focused on economics. Through high profile trips abroad and ambitious proposals at home Modi maintained an air of energy and initiative, but the results were modest. Meantime, domestic politics became more polarised, contributing to two high profile election defeats for the Bharatiya Janata Party (BJP) in state elections. 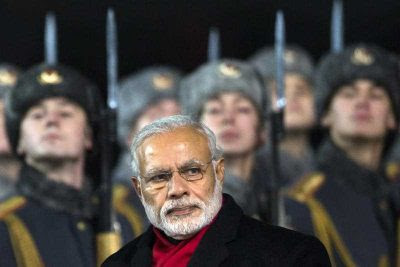 Modi’s brand of personal diplomacy was one of the year’s staples. In January, Barack Obama became the first US president to visit India twice while in office. The two countries announced agreements on implementing the 2008 India–US nuclear deal and carbon emissions. Over the year Modi took 16 foreign trips, soliciting investment and technical cooperation from Japan to Silicon Valley, wooing the Indian diaspora and finalising defence purchases with traditional suppliers France and Russia. Continuing efforts to promote the BRICS countries (Brazil, Russia, India, China and South Africa) saw the founding of a new development bank with funding of US$50 billion provided equally by all five members.

But India’s relations with its neighbours remained strained. Although a boundary dispute with Bangladesh was resolved and those with China were put on the back burner, ties with Nepal deteriorated dramatically. And ties with Pakistan continued to be turbulent. Talks were scheduled and cancelled, low level hostilities intensified, reduced then spiked again. Contact resumed at the Paris climate talks and Modi’s surprise Christmas Day visit to Pakistan earned gushing headlines. But, as some pointed out, this was preceded by a trip to Afghanistan, where Modi personally delivered Indian-made weapons systems, raising hackles in the Pakistani defence establishment.

Domestically the priority was on economic policy. Modi promised a pro-business agenda and sought to deliver on deregulation, facilitating investment and reducing spending. The budget was praised by business as taking modest steps in this direction.

Yet more ambitious proposals requiring statutory or constitutional changes failed to pass the upper house. These included a bill making it easier for companies to declare bankruptcy, another to ease land acquisition for public projects, and the introduction of a national General Sales Tax. In the end, the actions of the much-respected head of the central bank received more favourable attention than those of the prime minister.

One controversial area in the government’s economic policy has been social welfare spending. The government initially proposed to cut the preceding government’s signature employment guarantee program by limiting its application to poor districts, but shelved this in the face of opposition. Yet outlays for the program have been whittled down and reports of beneficiaries not receiving payments have become common. This is indicative of the government’s approach to social welfare generally.

The government’s challenges in parliament stem from the fact that the upper house is elected by state legislatures, a majority of which are controlled by opposition parties. The BJP’s losses in two crucial states, Delhi and Bihar, that it had won in the national election, bode poorly for its ability to pass legislation in the future. In Delhi the BJP lost to a new ‘good government’ party, while in Bihar it was defeated by a coalition led by a former regional ally. The elections indicated the potential for an alternative to the BJP that is not led by the once-dominant Indian National Congress.

The Congress itself remains in a permanent state of crisis. The party is still led by the Nehru-Gandhi family, contributing to organisational paralysis. Party elections are never held and new leaders rise only with the favour of the Gandhis, while their critics leave the party.

Adding to its woes, the Modi government was accused of intimidating its opponents, in both parliament and civil society. Former Congress prime minister Manmohan Singh as well as Sonia and Rahul Gandhi were prosecuted for corruption. And, citing security concerns, the government implemented new restrictions on non-governmental organisations receiving funds from foreign sources.

Conflict occurred over many issues. Conflict over caste quotas, eating beef — which many Hindus oppose for religious reasons — and religious conversion were especially challenging as in many cases the tensions stemmed from demands by BJP supporters. Modi was slow to comment in most instances, but there has been robust resistance from opposition parties, civil society, courts and even officials. Leading writersreturned honours bestowed on them to protest the government’s tolerance of sectarianism. The courts stepped in on more than one occasion to uphold civil liberties. And the Bihar election, fought partly over religious conflict, showed the potential for an explicitly anti-sectarian political program to win.

At the same time there has been a marked decline in popular belief in democracy in India, even compared to other countries. As revealed by the World Values Survey, India has seen a 30 per cent increase over the last two decades in those who do not express faith in democratic methods. The great peril is that the impatience to ‘get things done’ will lead to more support for the kind of authoritarian impulses that seem to be on the rise elsewhere in the world.

Arun R. Swamy is Associate Professor of Political Science at the University of Guam.