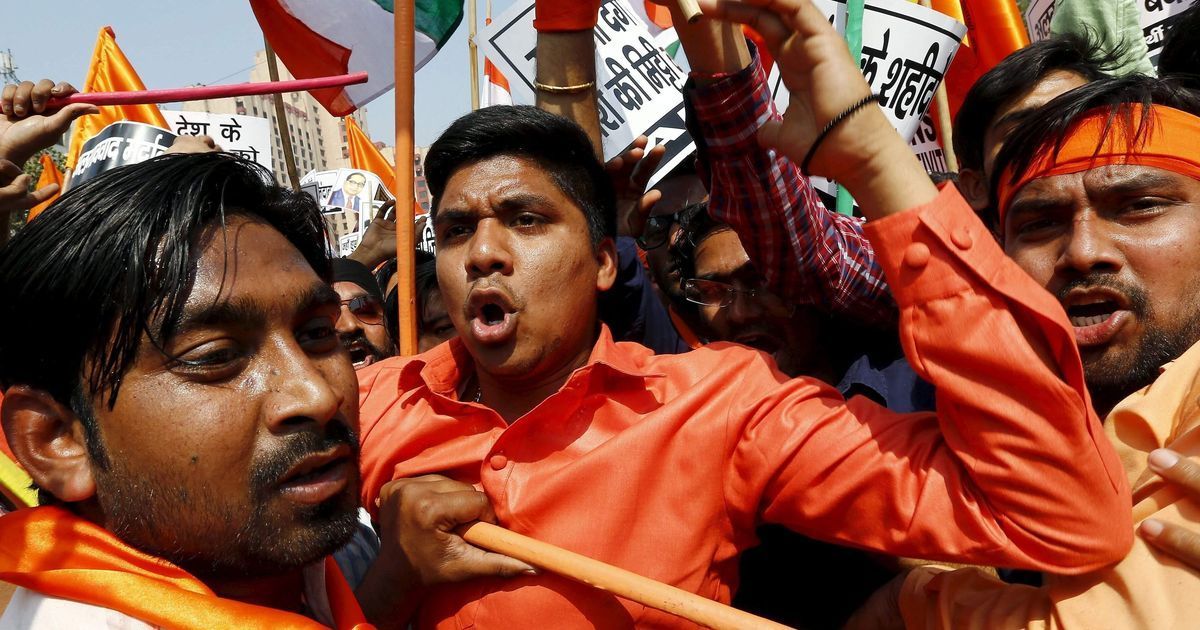 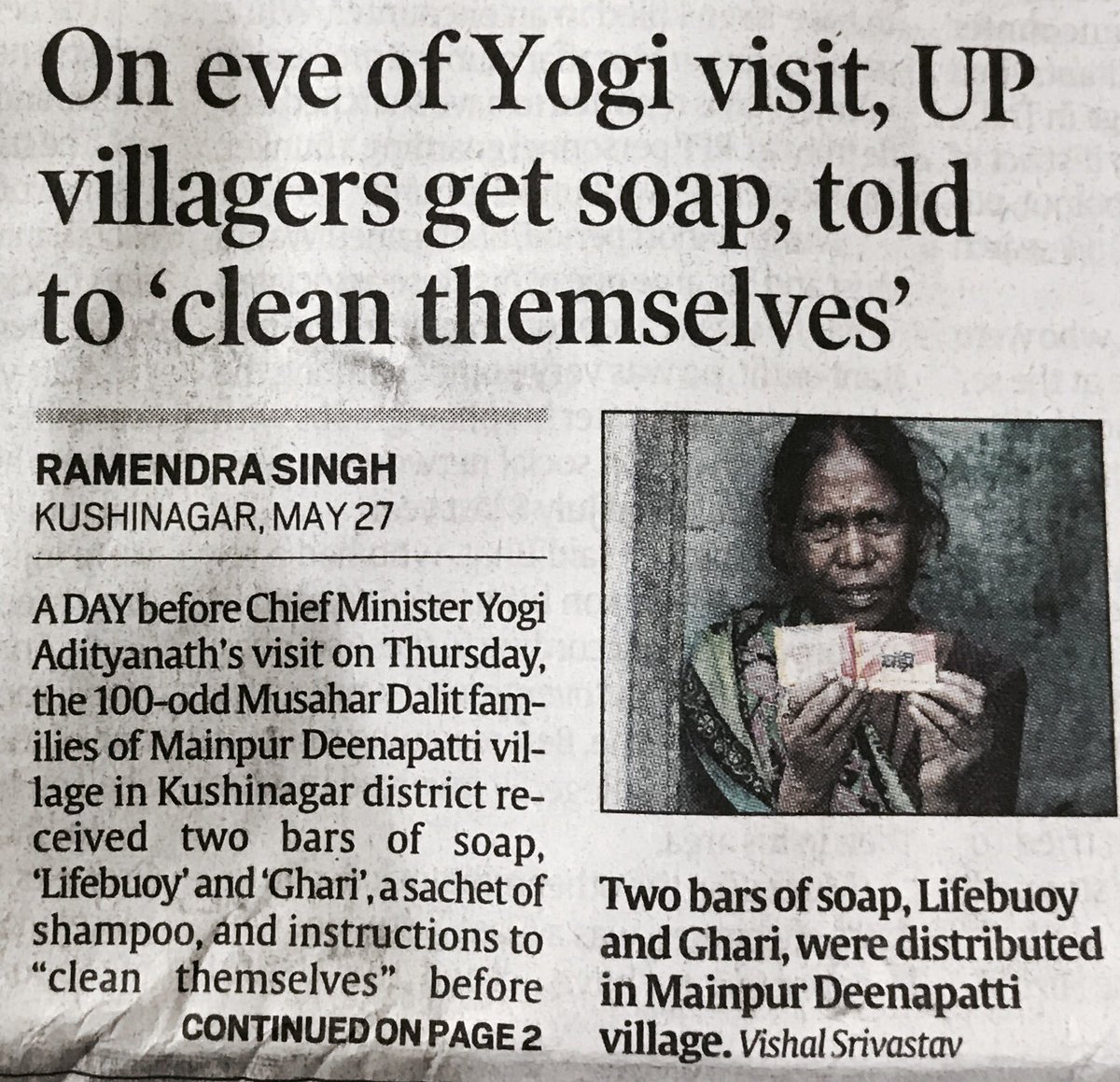 Here is my offer
Manu made me unclean.
Your prejudiced mind makes me
reek of caste names and exclusion
I glow with the fragrance of sores,
I stink of oppression and not your shit.


To please your lord, you offered me
soap and shampoo today.
Have you ever used them to clean
those foul smelling tongues,
which talk of raping minorities and violence?
Or used them to clean those brains,
that preach Manuvād and varnashramadharma?

With your offer,
you have abused my dignity.
With my offer,
I am abusing your conceit.

Appropriators of my Babasaheb
act as my ephemeral cleansers.
Soap exacerbates my wounds
of caste oppression and exclusion,
I don’t want your sympathy,
I want your detestation.
I play the song of assertion
in the cries of protests;
It gives me dignity and freedom,
a freedom to fight for.


For two meals
I carry your faeces!
If I don’t, I will sleep
hungry in this Republic.
Soap and shampoo only feed your ignorance,
not my stomach.


Your lord is here to capture the nation’s spotlight
We are bleached, to look presentable;
We are told to cheer like minions,
What will tremble when my insides break their silence?

Oh Lord, come see my home!
It is cleaner than your bhagwa drape.
But talk only when your consciousness is clean;
Smile only when you burn the Manu
dancing in your heart.
For my silence is about to break,
It is dawn already.


Before you turn your back
here is my offer.
I offer you my soaps, Ambedkar and Buddha.
Go clean your mental slavery,
Go annihilate caste and the Manu infused in your reason,
bleach your bhagwa to white.
There cannot be two Suns on this side, and
We have our own, to incinerate yours.

(i)  Amendments of consequential nature arising from amendments done in the PoA Act.

(iii) Provision of relief for offences of rape and gang rape.

After a failed two-decade bid for separate electorates, Ambedkar asked for reservation for Dalits in legislatures to be scrapped, arguing that these MPs did not represent the Dalit community.
Shoaib Daniyal  ·

The Bharatiya Janata Party’s conduct in the case of Dalit scholar Rohith Vemula shows that Dalits still have a very small stake in power in Delhi.

Before the young man’s death, the Union Labour Minister Bandaru Dattatreya and the Union Human Resources Ministry had hounded the Ambedkar Student Association – a Dalit body at the University of Hyderabad of which Vemula was a member – calling it “casteist” and “anti-national”.

After his suicide, a BJP spokesperson called Vemula an “abusive anti-national” and a “terror apologist” on Twitter. In the same vein, BJP general secretary P Muralidhar Rao describedVemula as a supporter of terrorism, while Human Resources Development Minister Smriti Irani denied that the case had anything to do with caste.

The BJP is often characterised as a “Brahmanical party” by Indian liberals and leftists – but it’s a description that, in real terms, could fit the Indian left and Congress as well. It must be remembered that Rohith Vemula had joined the Ambedkar Student Association after leaving the Marxist Student’s Federation of India because he was bitterly disappointed with its casteism.

Moreover, on paper, the BJP has a significant number of Dalit Lok Sabha members. Out of the 66 reserved Dalit Lok Sabha constituencies, the BJP won 60% – that is, 40 seats – in the 2014 elections. Almost 15% of the BJP’s Lok Sabha strength consists of Dalit MPs elected from reserved seats.

In spite of having such an impressive Dalit contingent, why did the BJP go so wrong in addressing this matter? Why did so many Dalit MPs not affect the functioning of their government and party? Why was, say, Dattatreya allowed to hound the Ambedkar Students Association? And how was the BJP spokesperson permitted to paint Rohith Vemula as a terrorist sympathiser even after his death?

The answer to these maybe lies in the fact that the reservation of seats in the Lok Sabha is an ineffective mechanism for ensuring Dalit representation in politics.

In this system, the BJP has 40 MPs elected from seats reserved for Dalits – making it the largest “Dalit party” in the Lok Sabha. However, the real political strength of these MPs can be gauged from the fact that not one of them made it to Narendra Modi’s cabinet when he was sworn in as prime minister. Later on, in November 2015, Modi did add two of these 40 to the government but neither were made cabinet ministers and had to be content being ministers of state.

Clearly then, this number of 40 Dalit MPs means almost nothing in terms of wielding real political power. While the BJP is dependent on the Dalit vote, these 40 Dalit MPs elected from reserved seats are not seen as crucial to attracting actual Dalit voters.

Ambedkar’s critique of the system

While this is only the latest manifestation, the ineffectiveness of this system of reservation has been a long-standing complaint of the Dalit movement, right from the time of BR Ambedkar.

In the 1931 Second Round Table Conference, held to discuss India’s constitutional future, Ambedkar had argued for separate electorates for Dalits, in which Dalit voters would elect Dalit representatives. Gandhi, as the leader of the Congress, opposed this, pushing for no caste-wise electorates (basically the current system). In 1955, Ambedkar minced no wordswhen he said that Gandhi’s system of a common electorate would elect Dalit nominees who “would really by slaves of the Hindus, not independent people”.

In the end, however, Ambedkar had to bend, since Gandhi went on a fast-unto-death. He signed the Poona pact, as per which Dalit representatives would not be elected by a separate Dalit electorate but by all castes. As a small concession to Ambedkar, however, a primary election was to be held for each Dalit constituency where only Dalits would be allowed to vote. The names of the four leading candidates from this primary would then be put to the common electorate for the final election.

As Ambedkar has predicted, the system of joint electorate was disastrous for his party and beneficial for the Congress, even though the latter’s leadership was completely dominated by upper castes. In 1937, in the first election held under the Poona pact, the Congress won more than half of the reserved Dalit seats. Ambedkar’s outfit, the Independent Labour Party, won just 12. In the next election in 1946, Congress’s win and Ambedkar’s defeat was even more decisive. The former won 123 out of 151 Dalit seats. Ambedkar’s party won only two.

Ambedkar was angry at the results and blamed the system of joint electorates for it. Hepointed out that in the 1946 election primaries, in which only Dalits voted, his party got 26% of the votes compared to the Congress’s 29%. Yet the Congress got 60 times the number of seats when the final elections, in which all castes could vote, took place. Thus these elected nominees from reserved seats did not really represent the Dalits, he argued. In late 1946, Ambedkar said:

And this wasn’t only Ambedkar’s bugbear. MC Rajah, who was described by Oliver Mendelsohn and Marika Viczianyand as “the most prominent pre-Independence Untouchable politician other than Ambedkar”, was originally a strong supporter of Gandhi and had fully backed the Poona pact. Yet, after only a year of seeing joint caste electorates in action, Rajah agreed with Ambedkar (in spite of their personal rivalry). In 1938, after the Congress government in Madras province refused to support temple entry legislation, Rajah wrotebitterly to Gandhi:

“I am forced to think that our [Dalits] entering into the Joint Electorates with the Caste Hindus under the leadership of the Congress, far from enabling us, has enabled the Congress, led by Caste Hindu leaders to destroy our independence and cut our own throats. “

After 1947, there was no question of having separate Dalit electorates. To begin with, a separate electorate for Muslims was widely believed to have been a crucial enabler for the creation of the Pakistan. Secondly, the Congress dominated the Constituent Assembly and there was little possibility of it suddenly reversing its two-decade-old stand, with or without Partition. In fact, the Indian Constitution, as it was scripted, further diluted Dalit rights vis-a-vis the Poona Pact, scrapping the system of Dalit-only primaries. As a final, desperate attempt, Ambedkar sponsored an amendment which aimed to ensure that candidates from reserved constituencies should also get 35% of the Dalit vote, thus ensuring that Dalit legislators were truer representatives of the community. However, Vallabhai Patel dismissed it, patronisinglyarguing, ” I resist this only because I feel that the vast majority of the Hindu population wishes you [Dalits] well. Without them where will you be? Therefore, secure their confidence and forget that you are a Scheduled Caste[…] or else if they carry this inferiority complex, they will not be able to serve the community.” [Emphasis added]

Unsurprisingly, in independent India’s first election in 1952, Ambedkar’s party won only two Lok Sabha seats. From this, Ambedkar concluded that the system of reserving seats for Dalit legislators elected via joint electorates was disastrous, the worst of both worlds. These elected MPs were not representing Dalit interests and by having reserved seats in the first place, Dalits were unable to build electoral coalitions with other social groups. In 1955, Ambedkar’s party formally passed a resolution asking for Dalit reservation in legislatures to be scrapped.

Like in 1932, Ambedkar was ignored in 1955 as well, and the system of Dalit reservation in India’s legislatures remained the same as before. That this is “sham representation” is borne out by the fact that, though upper caste interest groups keep on railing against Dalit reservations in jobs and education, no one really chafes at reservation in Parliament, given how limited its impact is on the structures of power. As Christophe Jaffrelot points out, in the initial years after independence, the Congress “became adept at co-opting Scheduled Caste leaders and and getting them elected by mobilising non-Scheduled Caste voters.” And now this system has been replicated by the Bharatiya Janata Party. So even though it is the party with the largest number of Lok Sabha Dalit MPs, the BJP is baffled when it comes to responding to a grave Dalit tragedy such as Rohith Vemula’s suicide.

This article first published on scroll.in